Africanized Honey Bees (AHB), also called "Killer Bees" by the media and horror movies, are a hybrid species of bee that is generally more defensive than the common European honey bee (EHB).  They might be more visible than other bees, since they tend to form smaller swarms more often than EHBs, and build hives in smaller places, such as water meter boxes.

Since 1999 all feral (wild) bees in Los Angeles County are considered "africanized".  This is not a reason to panic when seeing a bee, but a reminder to treat all bees with respect and leave them alone.  While bees are out foraging and pollinating flowers, they focus on their task and will usually not sting somebody unless provoked.

For information about local honey bees check out www.avbeekeepers.com

In the fall of 2006, some beekeepers in the U.S. reported losing 30-90% of their colonies and the symptoms associated with the dead colonies did not match those produced by know bee pests / pathogens.  Since then several groups of scientists have tried to find a cause for it.
CCD symptoms often associated with collapsing (weakening) colonies may include: 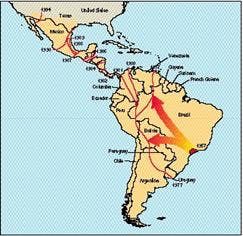 In the early 1600's European settlers introduced European Honey Bees (EHB) to North and South America.  Those bees were found to be good honey producers in the temperate climates of North America, but did poorly in the tropical and subtropical South.  To increase the honey production, the Brazilian government was looking for a more suitable species of honey bees.  They found a strain of bees from…

As a general rule, stay away from ALL honey bee swarms and colonies.